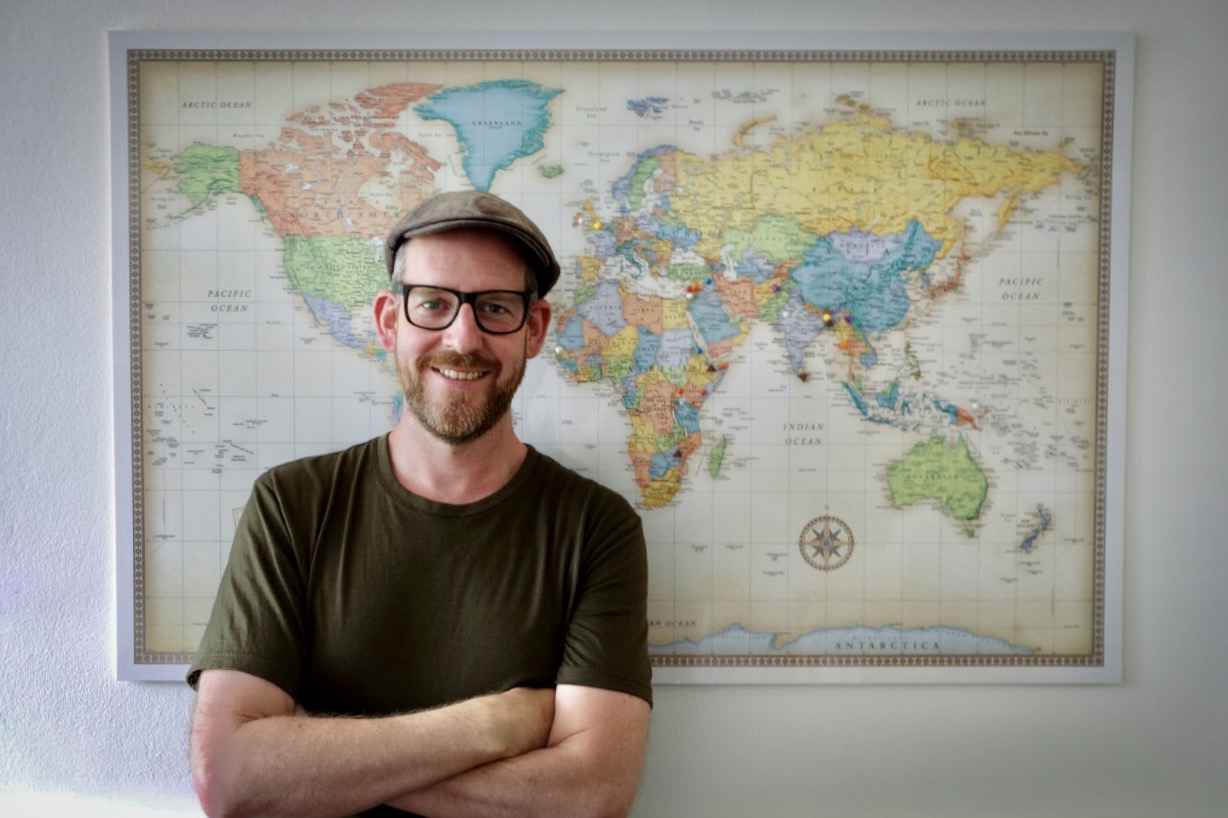 Benjamin’s PhD in Anthropology (2016, University of Sussex) captures the painful memories of Sri Lankan civil war survivors, and represents their voices in graphic novel form to reach the broader public. Benjamin is a Senior Fellow in Development Studies at SOAS, and the founder and Executive Director of PositiveNegatives, an initiative that offers services that combine ethnographic research with artistic forms of communication.

“Graphic Violence: Representing Conflict and Migration through Narratives and Illustrations”

Could you describe your dissertation topic to us?

My dissertation focuses on the conflict in Sri Lanka that ended in 2009 with the military defeat of the Liberation Tigers of Tamil Eelam (LTTE), otherwise known as the Tamil Tigers, and the death and disappearance of between an estimated figure of 75,000 and 146,679 Tamil civilians and LTTE combatants from that year. The research is based on narratives from oral histories taken largely from survivors of the civil war in order to produce a graphic novel to convey the story of a family whose experiences are paralleled among many other people from the Vanni in north-eastern Sri Lanka. Multiple methodologies were deployed from working closely with an illustrator, Lindsay Pollock, to focus groups and semi-structured and structured interviews listening to survivors’ testimonies and experiences based in Chennai, London, and Zurich with those people who are currently going through, or have recently gone through, the asylum process.

In what ways was your dissertation non-traditional/innovative in your field?

In anthropology, you’re normally looking at a 80 to a 100 thousand-word thesis. I submitted a 55 thousand word thesis accompanied by 110 pages of graphic novel. The written part provides the contextual and ethnographic foundations for the graphic novel that also elaborates upon the self-reflexive and participatory methodologies and ethical concerns of creating the novel itself. The accompanying graphic novel is hybrid in terms of the combination of text with illustrations and photographs, and with regards to a fusion between the ‘fictional’ with ‘factual’ – both deemed as conventions of representing and engaging with real-life events. The novel enables a wider career in terms of its readership amongst research contributors as well as others, and its role in promoting educational awareness and humanitarian advocacy on the recent conflict.

The research process itself was collaborative and participatory. It involved sitting down with respondents for a series of interviews about their experiences of the conflict, as the artist drew the scenes. The respondents engaged with the artist, saying, for instance, there that there were more trees in this area, or the explosion was much bigger, and so on. So the respondents got involved in the production of it all. Then, I would turn that testimony into a narrative, into a script, and take the script back to the respondents and allow them to have editorial control over it while still trying to keep it within a narrative framework that could be read and understood by a general audience.

This is now resulting in a 200+ page graphic novel, titled The Vanni, funded by the Arts Council England. One of the things that will make the book special is that this really is a piece of what we call “nonfiction fiction.” The emotional journey of each of the 20 respondents were put into a fictionalized family. We’ve had to go through a fictionalization process to get the narrative right while being loyal to the experience of our respondents (who are the owners of the stories), who checked, verified, commented, and edited all the way through the process.

As you followed this path, what was the reaction of some of the key actors (such as your supervisor, committee, examiners)? Did you receive any resistance along the way?

I did not see any resistance from within the university, but the resistance was actually coming from the personal journey. Before starting the PhD, I had worked for the United Nations (UN) in Sri Lanka for four years, which gave me a unique insight into the politics of the country. Part of my job as Communications Manager was to interview beneficiaries, but there was no academically rigorous methodology in the interviews; they were mostly life histories of the people. But this preliminary experience in the region really laid the groundwork for the PhD.

I returned from Sri Lanka in the end of 2008 and suffered from post traumatic stress for a couple years. I lost 33 of my staff in the conflict. That put me into a deep sense of post traumatic stress. I felt abandonment, guilt, and a sense of unearned privilege. Because the white UN worker gets to evacuate and goes back home safely, but the brown UN worker stays in the conflict zone and parishes. So, that really slapped me with a lot of different negative emotions, which continued throughout my PhD years.

I found my PTSD very difficult to stay still during the PhD, because I was getting too close to people in Sri Lanka, and that was the thing that was very painful, because the people that I got close to there ended up dying. So, the ethics committee at Sussex said that I needed to have counseling while I was doing my research, because I was ethically “high risk” as a researcher, and my respondents were “high risk” as well, being survivors of the conflict.

So, the resistance was mostly internal, rather than coming from my university. Most people at Sussex, and later at SOAS, where I work now, were excited about the project. Still, there were a couple of professors who felt that I diluted the discipline of anthropology, or that my work was not “true” academic research, because I didn’t speak Tamil so I could not have represented the people’s lived experiences properly. These professors were not from my university.

In my thesis defense, the reaction was the exact opposite. When I sat down in front of my two examiners, one of them said, “this is precisely the kind of thesis I want to get published in the Royal Anthropology Institute because it challenges the mainstream.” And most importantly, my work is going to be read. It is now turning into a graphic novel and it’s going to be out there telling many non-academics about the civil war in Sri Lanka and people’s lived experiences. And what’s the point of academia if your work is read by 10 people? I’m exploring a model to get my work out into the world and be read by non-academics and breakout of that ivory tower. I think this is a 21st-century thesis and I’m very proud of it.

How do you think your non-traditional dissertation helped you develop professional competencies and prepared you for academic/non-academic career prospects?

A professor of mine once said to me that having a doctorate in Anthropology about making ethnographic comic books is a really interesting place to position one’s company, which is the case for PositiveNegatives, which I founded. That professor said PositiveNegatives was really interesting for the academic world, and that I would be so much better placed as the director of it as a scholar, because otherwise, she said, “you’ll have a comic book company producing comic books.” And she was absolutely right. In three years, of the 19 projects that we’ve had, 16 of them have been academically funded projects, which makes the company sustainable. I’m really pleased that my PhD increased the credibility of the company in terms of research rigor. My PhD is really the bedrock of PositiveNegatives.

The non-traditional work also helped me overcome my own anxieties. I put things in my thesis about when I was talking to my therapist and I was like, “I’m not going to let the anxiety eat me up. I understand where all this is coming from, and I’m going to work with it.” And hence the name PositiveNegatives for my company. Through the thesis, I wanted to turn something incredibly negative in my belly to something positive.

As soon as the PhD finished, the company really kicked off. I’ve got a world map in my office, which has got 34 pins in it around the world. The PhD made that happen. I feel like I went through a rigorous academic exercise to do that PhD, but I don’t feel I came out of it on the other side as a traditional academic, and that’s probably fair enough because it wasn’t a traditional PhD.

What would you have done differently if you could do it all over again?

Throughout the process, maybe I could’ve been a bit kinder on myself every now and then. But overall, I’m glad I’ve carried out this research in a PhD context. Before the PhD, I would have approached this issue as a journalistic piece or as documentary work. The PhD really consolidated everything and put the boundaries around the research so that it was housed in ethnographic methodologies. I realized that I had a real responsibility being the custodian of so many traumatic lived experiences, and housing those in a PhD gave me the tools to undertake that responsibility. It really gave me the tools to work with it in a respectful, ethical, considered manner.

This is the very foundation of PositiveNegatives and all of my team (who mostly have Master’s or PhDs). We’re not just producing comic books and animations; this is a methodology. It’s wonderful, because it’s about respecting people’s stories, and giving them the space that journalism usually doesn’t. This involves going back and reconnecting with those people, and having them comment and edit and own their own stories. It’s their words. I’m really pleased I went through the PhD to develop this approach.

BACK TO BROADENING THE DISSERTATION